If there are no intake leaks, clean throttle body, adjust engine idle and erase engine code. If the code comes back you may have to replace the Electric Throttle Control Actuator (Motor) to repair the problem.

The cost of diagnosing the P0507 2007 NISSAN SENTRA code is 1.0 hour of labor. The auto repair's diagnosis time and labor rates vary by location, vehicle's make and model, and even your engine type. Most auto repair shops charge between $75 and $150 per hour.

The idle speed is more than the target idle speed by 200 rpm or more.

The Engine Control Module (ECM) controls the engine idle speed to a specified level through the fine adjustment of the air, which is let into the intake manifold, by operating the electric throttle control actuator. The operating of the throttle valve is varied to allow for optimum control of the engine idling speed. The ECM calculates the actual engine speed from signals of crankshaft position sensor (POS) and camshaft position sensor.
The ECM controls the electric throttle control actuator so that the engine speed coincides with the target value memorized in the ECM. The target engine speed is the lowest speed at which the engine can operate steadily. The optimum value stored in the ECM is determined by taking into consideration various engine conditions, such as during warming up, deceleration, and engine load (air conditioner, power steering and cooling fan operation, etc.) 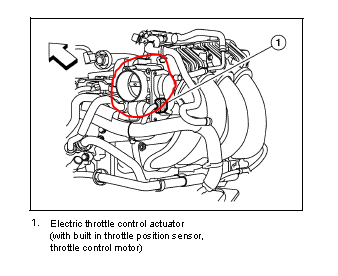 Need more information on how to fix the P0507 2007 NISSAN SENTRA code? Get Access to Factory Service Manuals

Get the P0507 2007 Nissan Sentra code diagnosed by a professional: Find a repair shop in your area

Help us improve AutoCodes.com. Leave a comment below or tell us if the information above helps you fix the code. What are the symptoms on your vehicle for the P0507 2007 Nissan Sentra code? Have you replaced any parts?
Any information is appreciated. Thanks
Top ⇧
Repair Importance Level: 3
1=Low 2=Medium 3=High What is this?
Repair Difficulty Level: 3
1=Easy 2=Moderate 3=Hard What is this?