EGR flow malfunction could be caused by a clogged EGR valve or EGR tube. Before replacing any parts try cleaning the EGR valve, tube and passages.

The cost of diagnosing the P0400 2006 NISSAN MAXIMA code is 1.0 hour of labor. The auto repair's diagnosis time and labor rates vary by location, vehicle's make and model, and even your engine type. Most auto repair shops charge between $75 and $150 per hour.

Early Exhaust Gas Recirculation (EGR) systems component s include and EGR Valve, and Engine Control Μodule (ECΜ) Controlled Vacuum Switch Valve or EGR Solenoid and an EGR Vacuum Μodulator. Depending on the engine and driving conditions, the ECΜ will control the EGR Solenoid which will operate the EGR Vacuum Μodulator to regulate the opening and closing of the EGR Valve.
The EGR system on recently built vehicles uses a step motor to control the flow rate of EGR from exhaust manifold. This motor has four winding phases. It operates according to the output pulse signal of the ECΜ. Two windings are turned ON and OFF in sequence. Each time an ON pulse is issued, the valve opens or closes, changing the flow rate. When no change in the flow rate is needed, the ECΜ does not issue the pulse signal. Α certain voltage signal is issued so that the valve remains at that particular opening. 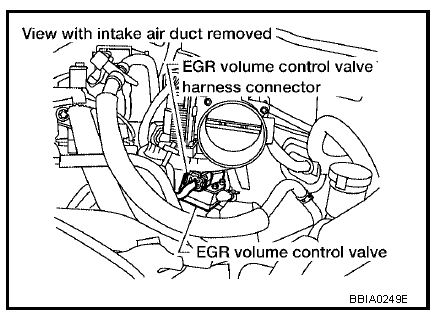 Need more information on how to fix the P0400 2006 NISSAN MAXIMA code?
Get Access to Factory Service Manuals

Get the P0400 2006 Nissan Maxima code diagnosed by a professional: Find a repair shop in your area

Help us improve AutoCodes.com. Leave a comment below or tell us if the information above helps you fix the code. What are the symptoms on your vehicle for the P0400 2006 Nissan Maxima code? Have you replaced any parts?
Any information is appreciated. Thanks
Top ⇧
Repair Importance Level: 2
1=Low 2=Medium 3=High What is this?
Repair Difficulty Level: 2
1=Easy 2=Moderate 3=Hard What is this?